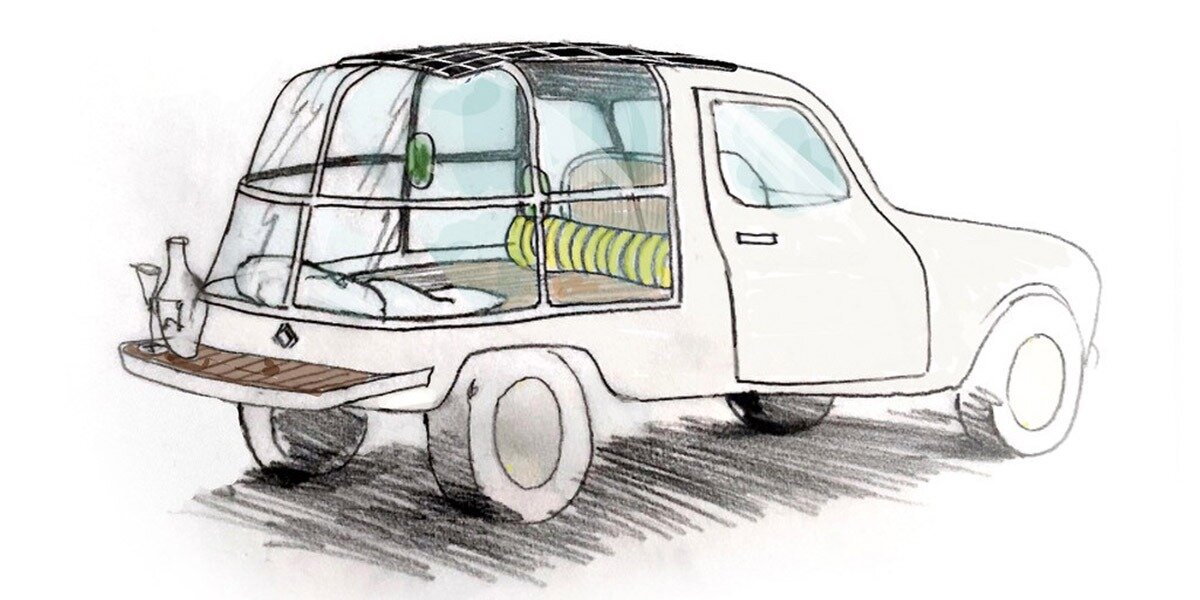 To celebrate the 60th anniversary of the Renault 4, the brand has teamed up with designer Mathieu Lehanneur to create the concept car SUITE N°4. The result is SUITE N°4, an original concept car inspired by a nomad hotel suite that will be unveiled today.

This year marks the 60th anniversary of the iconic Renault 4L, a car that has become a real success story. Manufactured in 28 countries, more than 8 million units have been sold in over 100 countries over 30 years.

Renault has turned the car’s anniversary into a year-long celebration with different initiatives. For instance, the brand launched a global social media campaign, posting a variety of content each month and international media were given the opportunity to take a ride in different historic Renault 4L models, some of which have been retrofitted with a 100% electric engine. Furthermore, a collection of 30 different editions of the Renault 4 has been on display since 8 October 2021 at the Atelier Renault on the Champs-Elysées in Paris.

The celebrations are set to continue, as other surprises are in store for the rest of the year. Today we are turning our attention to the second initiative in the programme for this year, the new collaboration between Renault and French designer Mathieu Lehanneur. Design and innovation in mobility have always been key values within the Renault brand and for Mathieu Lehanneur, which is why this collaboration was a natural step for both.

“The collaboration with Mathieu Lehanneur was a natural fit.” said Arnaud Belloni, Renault Brand Global Marketing Director. “We asked him to come up with a concept car showcasing his vision for the 4L. The finished product was extraordinary. A car which really encapsulates everything the brand has set out to achieve through the Renaulution strategic plan: create modern and innovative cars that provoke emotions.”

Renault’s Colour and Trim Design team and Mathieu Lehanneur worked together to come up with SUITE N°4, a concept car that represents the designer’s dream motoring experience, a Renault à vivre both inside and out.

Mathieu Lehanneur’s vision was influenced by the parallel worlds of automobile and architecture. Renault SUITE N°4 is a tribute to the 4L, channelling the same pure, understated and simple spirit while prioritising efficiency and spontaneity.

“SUITE N°4 opens the door to a new kind of mobility that strives to make people live experiences. I wanted to merge the worlds of cars and architecture to create an open-air hotel room. Even better than the finest palatial suite, the car is exactly where you want it to be, whether that’s by the sea, in the middle of a field or driving around the city you’ve always dreamed of.” says designer Mathieu Lehanneur.

SUITE N°4 retains the same exterior dimensions and lines as the iconic model but comes with a twist. The rear section and the hatch have been replaced with polycarbonate windows that provide lighting on a par with that of an artist’s studio. The transparent solar panels that sit on the roof let light through while helping to charge the battery of the car, which has been retrofitted and now fully electric.

The front of the car sports the same iconic lights, lines and silhouette as the original. The grill has been treated with polished aluminium to give the car a fluid, dynamic appearance. The body of the car is coated with three layers of paint to make it look like cement, a material synonymous with modern architecture.

According to François Farion, Design Director of Colour and Trim, “the creative dialogue process between our teams responsible for colours and materials and concept cars and Mathieu Lehanneur proved very fruitful. We place ourselves at the designer’s service to create his interpretation of the vehicle in the best way possible. We made suggestions and put no limit to the design.”

Inside the car Mathieu Lehanneur decided to use upholstery fabric to give a warm, energetic feel. The seats and the dashboard are covered with yellow velvet, whereas the backs of the seats are finished with a thick, ribbed chenille fabric for a robust look. The boot has undergone a complete transformation, featuring a natural fibre floor covering and a wooden drawer that can be removed to provide sheltered seating when the hatch is open. Like for the 4L back in the day, all of the materials are “made in France” and supplied by high-end Parisian furniture producers.

Renault SUITE N°4 will be exclusively unveiled on Friday 22 October at Christie’s, in association with Maison&Objet. The exhibition in the vibrant center of Paris will take place on Saturday 23 and Sunday 24 October, before the vehicles join the collection at the Atelier Renault from November.

Furthermore, the concept car will also be exhibited with a set design by Mathieu Lehanneur at the next Maison&Objet fair, which will take place from 21 to 25 January 2022 in the exhibition centre in Villepinte, north‑west of Paris.

The official images of the concept car will be released today on the UK press site following the unveiling in Paris.

Renault, a historic mobility brand and pioneer of electric vehicles in Europe, has always developed innovative vehicles. With the ‘Renaulution’ strategic plan, Renault has embarked on an ambitious, value-generating transformation moving towards a more competitive, balanced and electrified range. Its ambition is to embody modernity and innovation in technology, energy and mobility services in the automotive industry and beyond.